Ettore Bugatti designed one of the first modern high-speed railway systems in the world. His first RAILCAR was tested near the Bugatti factory in Alsace, France in 1933.

Before that date nearly all trains were hauled by heavy steam locomotives. The Bugatti railcars were built as single, double or triple ‘car’ units with either two or four 12.7 litre petrol engines centrally mounted in one of the cars. Each car was mounted on two 8 wheel bogies and the linked engines were arranged to drive two or four of the eight axles via drive shafts with hydraulic clutches and reversing gears.

This modular system of powered and trailer cars could be arranged in various combinations to suit the different needs of the French railway companies from the smallest 36 seater to the triple set 144 seat train. The fastest, most comfortable, was known as PRESIDENTIAL which had 4 engines producing 800 horsepower in a double set with 48 luxury seats. In this form a speed of 196 kph (122 mph) was achieved in 1934 which was a new world rail speed record.

These railcars were highly successful being light, clean and comfortable as compared with steam powered rolling stock. Their chief asset was speed and the railway companies were able to drastically reduce long distance journey times.

From the end of 1933 for five years the Bugatti factory built and maintained more than a hundred railcar units which resulted in a huge expansion of the small factory and much needed revenue in the difficult economic climate of the time.

Ettore Bugatti was not a formally educated or qualified engineer and it is remarkable that he was so successful with this revolutionary rail project which he personally conceived, designed and developed between 1931 and 1933. Every aspect of the system was carefully considered and he took out numerous Patents to protect his rights to his inventions. Many aspects of the design were developed from his ideas for motorcar components. The engines, for instance, were practically the same as the straight eight cylinder, 24 valve, monoblock type used in the luxury class Bugatti car: the Royale. The cable operated twin shoe drum brakes were similar to the Bugatti car brakes of that time. 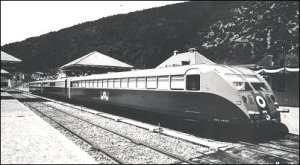 There were many entirely new ideas. The railcar chassis, body and the arrangement of the lightweight monocoque bogies with sophisticated systems for achieving a smooth, stable, quiet and comfortable ride were entirely novel. As always with Bugatti the method of construction of each part was conceptually integrated with the design of the part itself. Several of the relevant Bugatti Patents were for special machining processes and the factory layout was neat, logical and efficient.

These Bugatti railcars were designed to run on petrol/alcohol fuel of which there was a plentiful supply in France in the early 30s. However, this fuel became more expensive and eventually the Bugatti equipment was phased out on economic grounds. For a time, though, they had been a well known and popular feature of the French transport system.

In the 1990s we may take for granted that modern railways use high performance power units and particularly, streamlined and lightweight construction. The railcar concept that Ettore Bugatti first sketched out in October 1931 can be taken as a very early example of this modern line.

We have numerous more detailed sources of information about Bugatti railcar products and for information on references please contact the Bugatti Trust.