In the 1920s to cross the Atlantic usually took at least 5 days. The age of safe, long distance flying was far in the future. Ettore Bugatti conceived an idea for an exclusive high-powered 8-passenger boat that would be able to cross from France to America in 50 hours.

This was an extraordinarily ambitious proposal, which in fact was never realised. The design was for a very narrow fully enclosed hull powered by six 15 litre, 8-cylinder petrol engines with a total output of 2400 horsepower.

This boat design incorporated a submarine like conning tower and ventilation/exhaust snorkels and was designed to be ‘semi-submersible’. The depth was to be controlled by hydrovanes so that, at speed, it could simply pass through large waves and be relatively unaffected by bad weather and high seas! 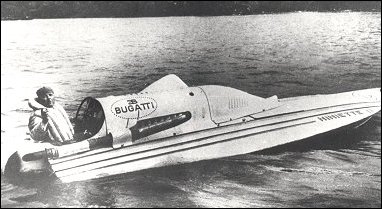 With modern applications this type of stabilisation is commonplace but whether such a system could have been made to function with the control technology available to Bugatti in 1925 is open to question.

Eventually, of course, the need for this type of transatlantic passenger carrier was superseded by the development of air travel but from the perspective of 1925 the ideas must have seemed relevant and exciting.