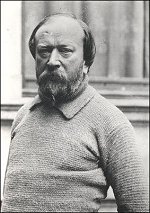 Carlo Bugatti (1856 – 1940) was born in Milan and became an artist and designer of international renown. He trained at the Brera Academy of Fine Arts and was greatly influenced by the early exponents of the ‘New Art’ in their reaction against the heavy, ornate, classical, Renaissance, Baroque and Rococo styles fashionable in the mid 19th Century.

Carlo Bugatti worked in architecture, interiors, ceramics, musical instruments, paintings, silverware and textiles as well as the furniture for which he is best known. As a stylist he was highly individualistic, although drawing on Gothic, Moorish and Oriental influences and, particularly, the work of Violet le Duc, nearly all his work demonstrates a most confident use of simple powerful form; sometimes geometric; sometimes organic.

Many of the pieces were elaborately finished in a variety of colours and textures with intricate insect like decorative motifs. In the case of furniture this surface treatment may help to disguise the structure jointing and method of construction and contribute to the sculptural unity of the piece.

Apparently, the Bugatti household was an interesting and artistically stimulating environment. Many of the family friends and visitors were musicians, painters and sculptors and freedom of individual expression and an open exchange of ideas were traits which were encouraged, expected and valued.

From the early 1880s Carlo Bugatti’s output of interior designs, furniture and silverware was prodigious and it seems that his work was highly regarded. His self-confidence and promotional talents no doubt helped him make a commercial success of his industry.

Carlo married Therèse Lorioli and they had three children – Ettore, Deanice and Rembrandt. Some of Carlo’s talents, his individuality and his approach to his art, whether by nature or nurture, seemed to resurface in the following generations of his family.