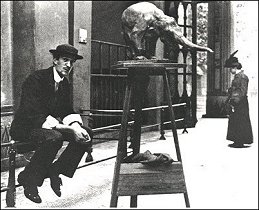 Rembrandt Bugatti (1884 – 1916), younger son of Carlo, was a naturally gifted sculptor. As a child he was encouraged by the family friend and renowned sculptor, Paul Troubetzkoy, to work in plasticine or clay.

These media suited his expressive style allowing direct and rapid manual working and re-working. His subjects were usually animals, which he patiently and carefully observed, often in the Paris Jardin des Plantes or the Antwerp Zoo. He said that many of his animal subjects became his friends and in his work he portrayed them with great sensitivity. The pieces often brilliantly show animal characteristics such as grace, power, timidity, maternal tenderness, playfulness, sexuality and sometimes humour. Rembrandt’s animals, it seems, were never violent or aggressive.

When he was 18 (1903) Rembrandt left home and went to Paris where he associated with the art foundry and gallery owner, Adrian Hébrard. Hébrard and the master founder Palazzolo formed a powerful group developing the technique of lost wax bronze casting and patination to new heights. The Bugatti bronzes which were produced from the clay originals were exhibited and promoted by Hébrard and were very highly acclaimed.

The artistry of Rembrandt Bugatti’s animal sculptures developed, from his earlier natural style which has been described as impressionistic, where form is paramount, to a later, more studied expressionism. Throughout this process, however, the sculptor seems to imbue each piece with the essential spirit of the individual subject. Respect, even homage, is always evident.

Personal human relationships were not always easy for Rembrandt. Despite the continued success of his work, after 1911, he became gradually more isolated, anxious and anguished. He was often desperately short of money. Following the outbreak of the First World War he lost many of his ‘friends’ when the stock of the European zoos was reduced. With the horrors of war his gentle art must have seemed out of place. He died in 1916.