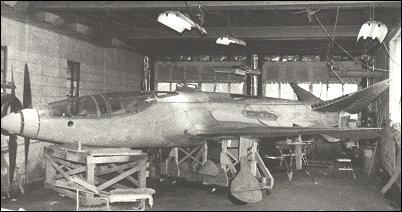 During the First World War in France Ettore Bugatti designed a series of aero engines and in 1936 Bugatti proposed a number of land and air speed record projects.

During the First World War in France Ettore Bugatti designed a series of aero engines. There were 8 and 16 cylinder versions and a few were built and tested but they were not put into production early enough to be useful in the war effort.

The Type 34 Bugatti aero engine was a new design dating from 1923. It was comprised of two in-line 8 cylinder monoblock units with a total capacity of 31.4 litres. Although this engine was never built the design, in single unit 8 cylinder form was the basis of the Bugatti Royale car engine and was also used subsequently for the Bugatti RAILCARS.

In 1936 Bugatti proposed a number of land and air speed record projects. Eventually he was provided with funds from the French government in order to develop his ideas for an attempt at the air speed record, which then stood at 440 m.p.h. To this end Bugatti built a handed pair of his 4.9 litre supercharged Type 50B racing engines. The full power of each engine was about 500 HP.

Bugatti established a team headed by aircraft designer Vicompte Louis de Monge de Franeau at Levalois to build the airframe. The design incorporated many new features such as semi-automatic control systems, engine and drive arrangement and a reverse flow radiator set-up, which are the subjects of Bugatti Patents.

This beautiful and advanced aircraft was built and fitted with its two engines but before it ever flew the outbreak of war put an end to the project.

Recently it has undergone restoration work and is now on exhibit at the EAA AirVenture Museum in Oshkosh, Wisconsin, USA.