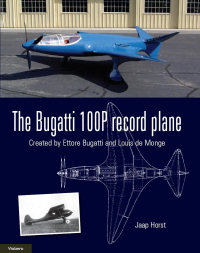 The Bugatti 100P – an art-deco masterpiece – is arguably the most elegant aeroplane ever designed. It was also the most technologically-advanced of its time. Designed initially to set a world speed record elements of it’s most notable features, well established by mid-1937, predate the development of the best Allied fighters of World War II.

Hidden from view for much of the late 20th Century, few enthusiasts know about or have seen this remarkable machine.

Written by the well known authority Jaap Horst we have for the first time a full history of this remarkable aircraft and the background of Louis de Monge and Ettore Bugatti who built it.